Cooking with beer is a pretty sweet deal all around.

First off, it gives a huge flavour kick so you don’t need to add any salt or vinegar or any of those soupy tricks. Second of all, you can sample your ingredients as you go (meaning you can drink while you cook). I guess you can do that anyways but you’re already using the beer for something else, so why not?

The beer I used was very strong so to me, it still tasted good, but it gave a bit of a bitter taste. Not over-powering, but still really strong. I didn’t use pale ale as the original recipe from The Beeroness suggested, so that was a fault on my part. Either way it didn’t turn out badly and the whole pot got eaten!

I went to St. Lawrence Market without a recipe in mind, which is not a great idea. There are way too many cool things there and I tend to buy more than I need, so I limited myself and only bought some broccoli, mustard and mushrooms.

Sidenote: This is completely unrelated to the recipe, but while I was at St. Lawrence Market I saw the coolest thing that I never knew existed. I believe it was called “pop-a-cob” or something along those lines, and it’s basically an entire cob of corn that you microwave and season to eat as popcorn. I wasn’t able to buy it because my microwave was shorted out from the floods we’ve been having, but once it’s up and running again I’m going to give that a go. 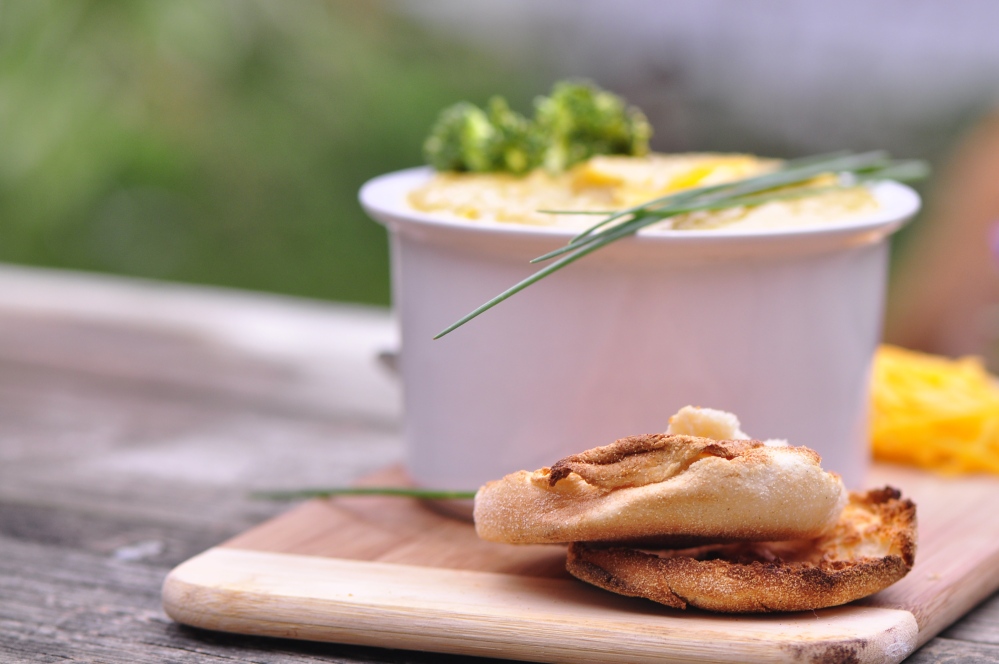 Bring water and hot chili oil in a large pot to boil. Once boiling, add broccoli and cook for 5-7 minutes until very soft. Strain, rinse with cold water and set aside.

Heat butter in a large pot over medium-high heat and add onion, celery and carrot. Cook for 6-8 minutes until carrots are very soft. Add in garlic and stir for 1 minute. Remove from heat and allow to cool.

In a large food processor, add 1 cup of beer, corn starch, both cheeses and onion, celery and carrot mix. Blend for 3 minutes until completely smooth and transfer pack into pot with the remaining beer. Next, add the broccoli and broth to the food processor (don’t rinse it out in between, it’s all going in the same pot in the end). Process for 1 minute until smooth and transfer to pot. Mix in heavy cream.

Keep soup on medium heat for another 5 minutes, stirring occasionally. To serve, top with chives and pair with fresh croutons or bread.