Anyone that knows me knows I don’t do coffee. I non-jokingly become a bit of a psychopath. Shaky hands, clammy palms, crashing hard…it’s a sad sight.

London Fogs on the other hand get thrown back all the time. Earl grey, steamed milk, and vanilla make the perfect combo. If I could hook up an IV filled with it, I probably would. That and matcha.

Toss all of that into a cake, dye it purple, and you have a crowd pleaser.

For the icing, I got the idea to infuse the icing with earl grey from The Cake Blog. I made this cake twice (forgot my camera the first time, cake for everyone!) but the second time I used about 4-5 tea bags and sealed them in a single one. It takes away the step of having to strain out any loose leaf pieces.

There are a few specialized tools that helped me out in the process. Firstly, this was my first time making a layer cake and I was terrified. I used Wilton’s layer pans, along with their cake leveler* and trim n’ turn cake decorator, and it made life much easier. I also used a candy thermometer, make-shift double boiler and stand mixer. Not all of these things are necessities, but it makes like a thousand times easier and smooths over the process, especially for a beginner like myself.

This icing is one of the best I’ve ever had — it’s not overly sweet in comparison to many other recipes/store-bought goods and it tastes phenomenal. Being the earl grey fiend that I am, I’ve tried London Fog macarons and gelato before, but never in cake.

Take a look through the recipe before starting. Ask questions @RonnieSheppard if you want to know anything or see any more photos from the process. Prepare yourself to wash some dishes and load up on too much buttercream! 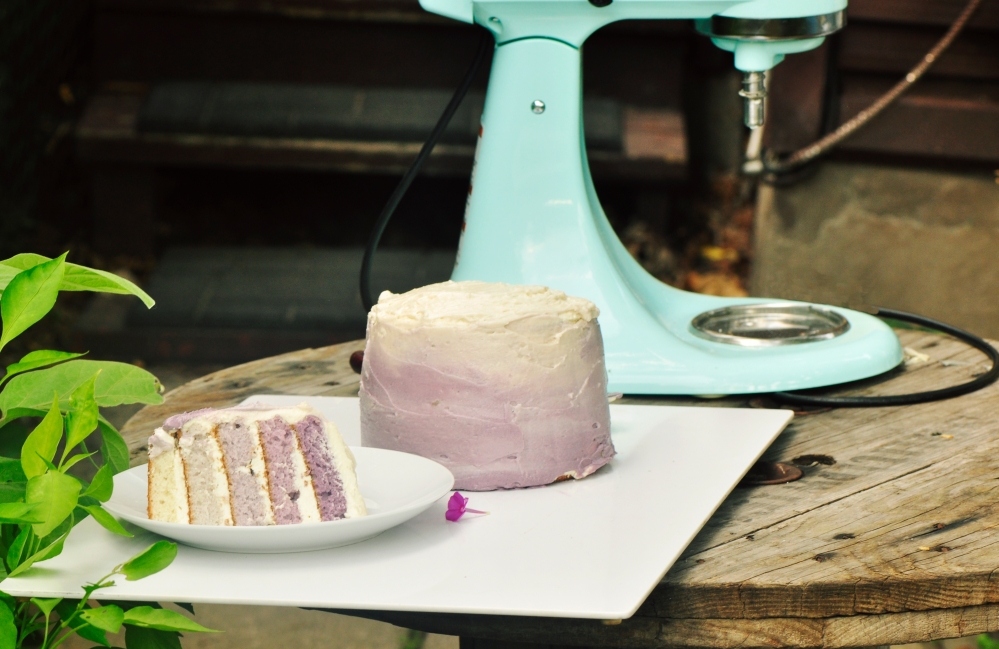 *If you made a funny face at what “cake leveler” means, it’s a tool that ensures an even thickness and cut of each layer of cake instead of using a bread knife or floss.

For the infused icing:

For the salted caramel: 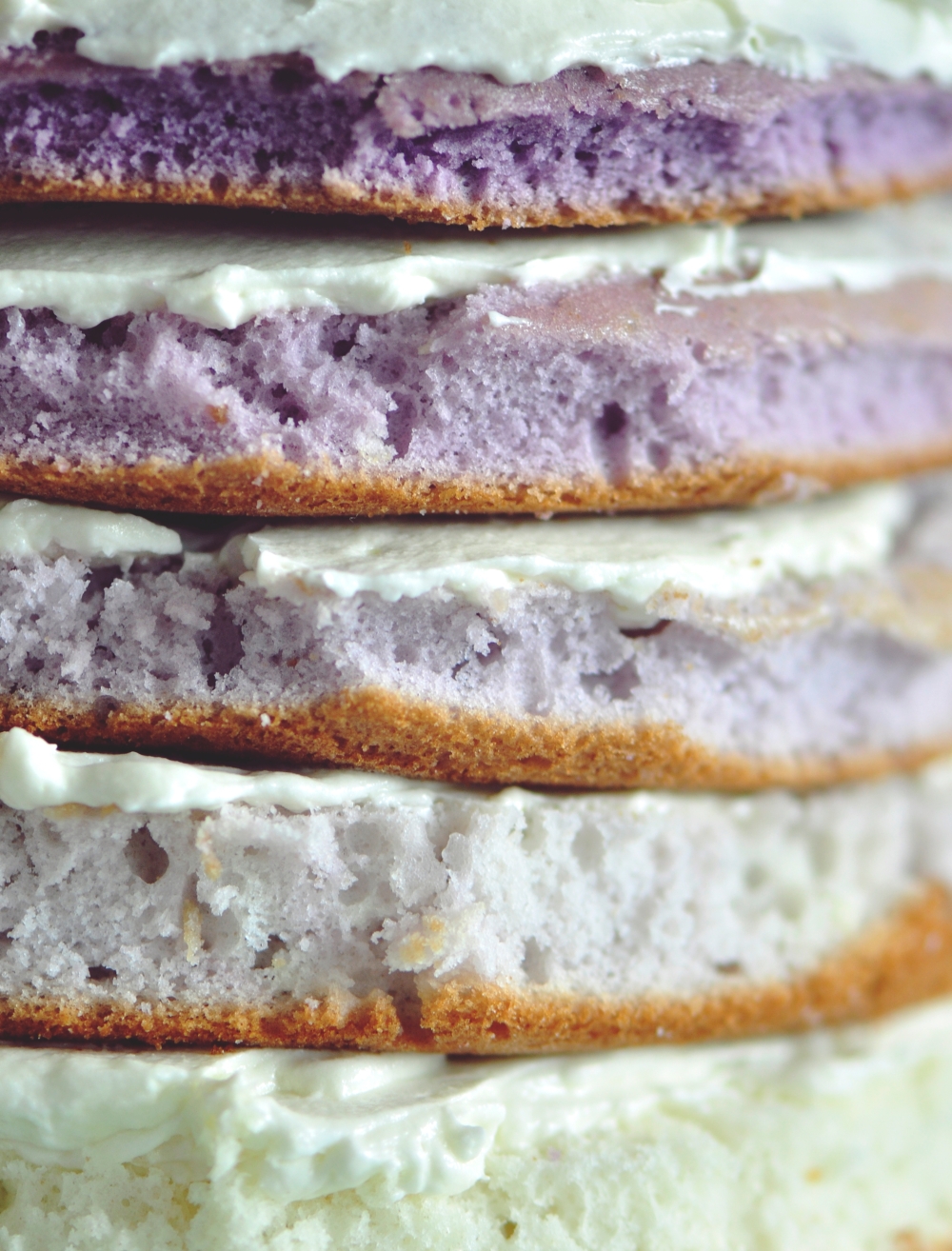 Preheat oven to 350 degrees F. Grease your 5 6-inch cake pans and set aside.

In a medium-sized bowl, cream together the sugar and butter. Beat in the eggs, one at a time, then stir in the vanilla. Combine flour, salt, and baking powder, add to the creamed mixture and mix well. Stir in milk.

Divide the cake evenly between the 5 cake pans until the pans are almost full. Set one pan aside. With your food colouring, put one drop of red and one drop of blue in the first pan and stir to combine with a silicone tool. In the second pan, two drops of each, third has three drops, fourth has five drops. Dip a spatula in the lightest coloured cake batter and stir into the plain one, tinting is slightly and subtly.

Bake between 10-15 minutes until cooked and cake is springy. Allow to cool for 5 minutes and set on a clean, dry work surface. Using a cake leveler, even out the tops of each cake; discard scraps.

For the infused icing:

Place 1 cup of the butter in a saucepan with 4-5 tea bags tied into a loose leaf satchel. Heat over medium heat until the butter melts, then reduce the heat to low and simmer for 5 minutes. Remove from heat and let rest for 5 additional minutes. Remove the tea and refrigerate it until has reached the same consistency as softened butter, about 20 minutes.

Place the egg whites and sugar in a heat-safe bowl of a stand mixer. Whisk them together by hand to combine. Fill a medium saucepan with a few inches of water and place it over medium-high heat to create a double boiler. Place the mixer bowl on top — the bottom of the bowl should not touch the water. Whisking frequently, heat the egg mixture until it registers about 155-160 degrees on a candy thermometer. Wearing oven mitts, fit the mixer bowl onto the stand mixer.

With the whisk attachment, beat the egg white mixture on high speed for 8 to 10 minutes, until it holds medium-stiff peaks. When done, the outside of the mixer bowl should return to room temperature and no residual heat should be escaping from the meringue out of the top of the bowl. Stop the mixer and swap out the whisk attachment for the paddle.

With the mixer on low speed, add the vanilla, tea-infused butter, and 1 cup regular butter, a couple tablespoons at a time. Once incorporated, turn the mixer to medium-high and beat until buttercream is silky smooth, about 5 minutes.

Split the icing into four bowls and dye accordingly: leave one white, dye one dark, one medium, and one light.

For the salted caramel:

Place the sugar, corn syrup, and water in a heavy-bottomed saucepan. Stir to combine.

Heat over high heat, occasionally swirling the pan, until it turns a medium golden amber color (about 8 to 10 minutes). The sugar mixture will begin to rapidly boil before slowing down and darkening in color. Remove the saucepan from the heat once the correct colour is reached and the bubbles start to subside (the darker the colour, the deeper the caramel flavour).

Whisk in the cream — careful of the mixture spitting up hot bits.

Add the butter and continue to stir until melted. Add the salt and vanilla and stir to combine. Pour the caramel into a heat-safe container and let it cool until it reaches your desired consistency or refrigerate until use. It will thicken as it cools.

Place the bottom layer of cake on a Wilton Trim ‘n Turn rotating cake stand. Spread 1/2 cup of the white buttercream on the surface with a spatula; top with next layer of cake and repeat until all cake layers are stacked and iced. Ice a thin layer of buttercream around the exterior of the cake as a crumb coat, and refrigerate for 10 minutes.

Remove the cake from the fridge. Place large dollop of the darkest icing on the bottom of the cake, followed by medium in the centre, and light on top. Smooth out around the cake, rotating the stand, to create an ombre look. Replenish as needed until the entire cake is covered.

Pour caramel sauce over the slightly chilled cake, letting it drip over the edges. Save some extra sauce for people to drizzle over their pieces as desired, or just for you to eat ice cream while watching Netflix exhausted from all the cake-making.