Mac and cheese is the ultimate comfort food. And even though the packaged stuff is good once in a while, it loses its charm pretty quickly. Why is the powder so orange, and why do the noodles get gross after 10 minutes? Unanswered questions.

This mac and cheese still serves as a great comfort food, but you can eat it without the suspicions about what’s in your food. I used both cheddar and mozzarella, along with a handful of spices, to try and get the best flavour I could. I also put a layer of panko on top for extra crunch.

My brother suggested that I name this dish “Chacarron Macarroni” because of this hilarious yet horrible song that we listen to as a joke. Really, listen at your own risk. I decided against naming it that because I figured most people wouldn’t get the reference, but that’s what I’m calling it around the house.

There are a few things I would change about this recipe, so you’ll definitely be seeing some creative variations in the future. One thing is that I imagined the panko would be a nice crispy layer, but once it’s baked between the cheese it becomes soft, and doesn’t add any real flavour. I’d toast the panko to give it some extra crunch and taste, or substitute it for something else. Another thing I found was that the top layer of cheese was amazing, but that strong cheesiness didn’t carry throughout the dish. The noodles/sauce still tasted good since there was a mix of spices and lots of cheese, but it could use an extra booster next time. I would almost say put MORE cheese in, but I may just like cheese too much.

I think because I like my mac and cheese creamier, almost soupy, I would try it stove top as well. Either way this recipe is very open to adaptation. 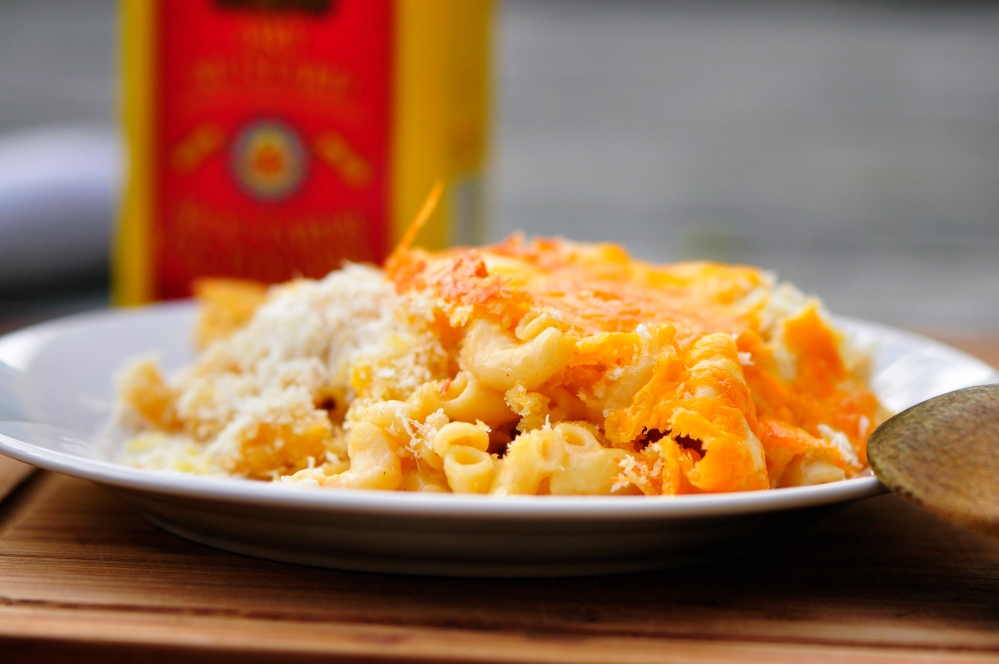 Bring a large pot of water to boil, and preheat oven to 350 degrees F.

Once water has boiled, add elbow pasta, and stir consistently until pasta is cooked al dente (still slightly hard). Strain and set aside back in the large pot. In a separate medium-sized saucepan, whisk together milk and flour. Bring to a boil over medium-high heat, still stirring frequently. Bring down to a simmer and whisk often until mixture it thick and creamy; this should take about 5 minutes.

Remove the flour and milk mixture from heat. Gradually stir in 2 cups of the cheddar, 1 cup of the mozzarella, salt, pepper, cayenne, garlic powder, Worcestershire and dry mustard. Whisk together until well combined.

Place casserole dish on the middle rack of the oven, and bake until the cheese is golden brown; about 10-15 minutes. Set oven to broil (keep a VERY close eye on your pasta–it burns easily!) and let cook for another 60 seconds until lightly browned and crispy. Serve immediately, or store the rest for leftovers the next day.