In honour of celebrating Pancake Tuesday, I decided to make some sweet potato pancakes with onion and a pretty big kick of spice (you can adjust it if you want it to be mild). They’re packed with protein, easy to make and you’ll definitely want seconds.

These pancakes are basically a twist on traditional potato latkes (pancakes) which are made with flour and don’t use sweet potato or spicy flavours. I prefer these to the regular because I find when you make latkes with flour and fry them, the flour absorbs a lot of that oil even when you drain them on paper towels afterwards. The sweet potato gluten-free ones don’t hold on too much oil but still have the crunchy outside with the soft potato and egg in the middle.

Potato pancakes are great because you can eat them with so many different kinds of condiments, and they are gluten-free. I like to eat mine with beet horseradish, sour cream, spicy maple mustard or smoky chipotle mayo. 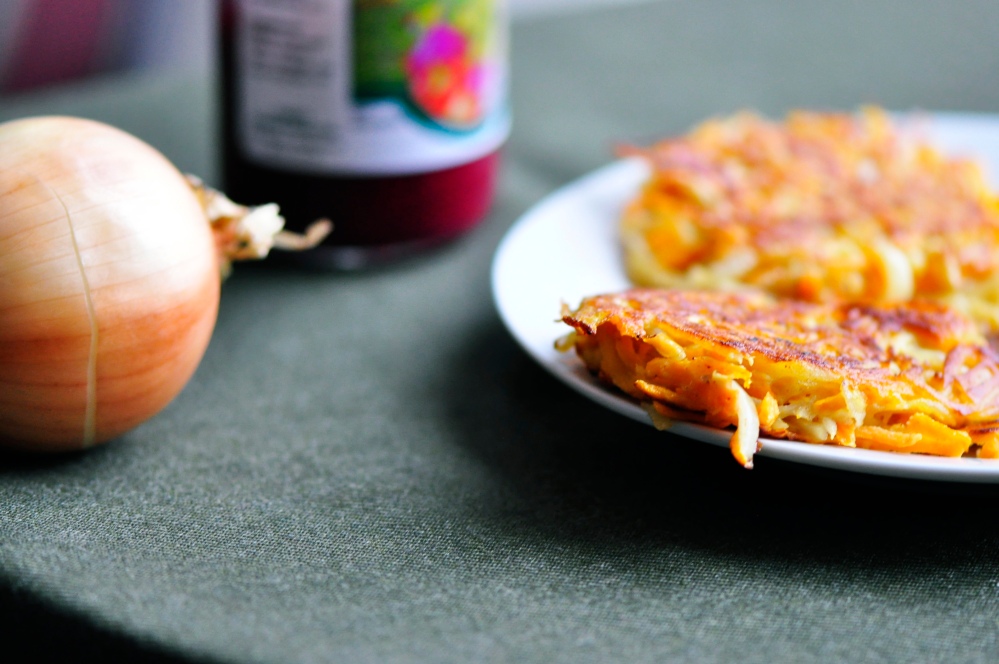 In a food processor with a shredded blade attached, shred potatoes and sweet potatoes (you can also do this with a manual shredder, it’s just a lot faster this way). Squeeze out any excess liquid from the shredded potatoes, mix with onions and put aside. In a large bowl beat eggs until smooth and light, then add cajun spice, cayenne, salt and hot sauce. Add shredded potatoes and onion to the egg mixture and toss until well coated.

In a skillet, add part oil and part butter over medium heat. Add roughly 1/4 cup of the potato mixture at a time, pressing on the tops with a spatula to flatten. Fry on medium-low heat for about 7 minutes on each side until golden brown and cooked. Repeat with remaining potato mix. Serve hot with your favourite condiments, or store in the fridge for next day’s lunch. To reheat, bake in oven on 375 degrees F for 5 minutes, or fry in a pan.