I have been wanting to make these for a long, long time. The wait was worth it, because I think this could be my proudest recipe.

I’m a bit of a picky sandwich eater because any form of soggy bread is my enemy. That’s why paninis are so perfect because the bread has a bit of a crunch and the filling is extremely flexible.

I made savoury cheese waffles which are good just to eat on their own, but when you pack them full of veggies, cheese, spreads and sauces it makes them that much better.

This recipe is also flexible enough that none of your ingredients will go to waste. If you don’t have enough people to eat 6 sandwiches, just save some waffles for another day. You can also put a little more or less of each ingredient depending on personal taste.

Also, hopefully you have a less ghetto waffle iron than myself. I posted a photo of it below so you can all marvel at this high-tech beauty. But it works, so hey. 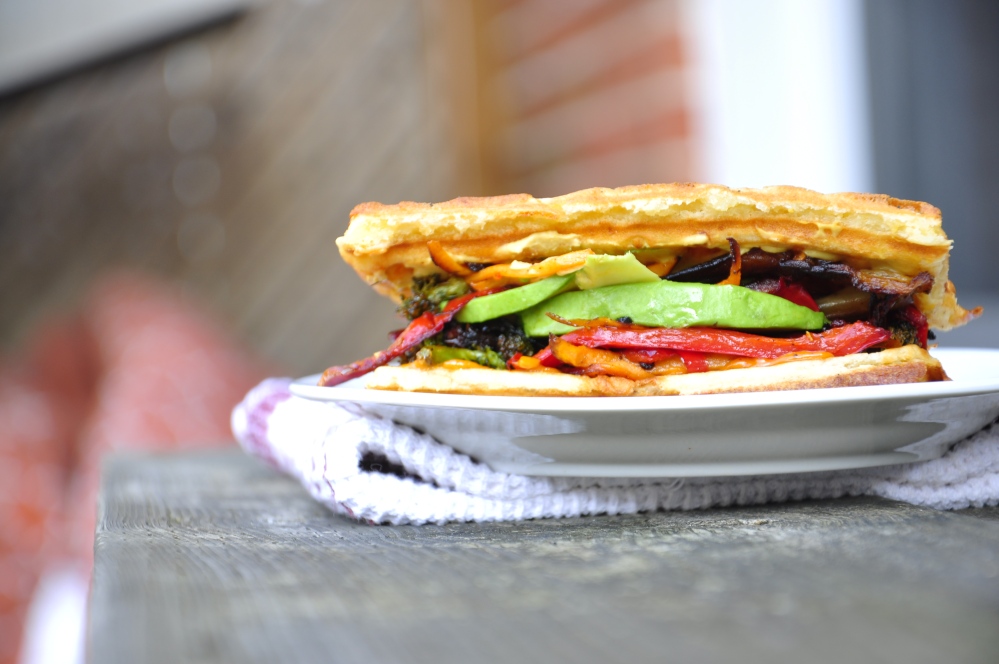 In a medium-sized bowl, mix together flour, baking powder and baking soda until well combined.

In a seperate medium-sized bowl, beat together eggs, buttermilk and butter until light and fluffy. Gradually add the dry ingredients until there are no more lumps and everything is a smooth cake-batter consistency, but not runny. Mix in cheese, sugar, yeast, salt and pepper.

Preheat your waffle iron to medium-high heat. With a pastry brush, brush a small amount of vegetable oil on the iron to make sure the batter won’t stick. Nothing is more frustrating than making really good waffles and ruining them because the iron wasn’t greased.

Once preheated, pour roughly 1/2 cup to 3/4 cup batter onto the iron depending on how large it is. Close the top, and keep iron closed for 3-4 minutes until waffles look golden brown and cooked all the way through. Remove waffles from iron with a fork or spatuala (be careful not to touch–killer hot!) and let them cool on a wire rack or cutting board. Don’t stack them on top of eachother because they can get a little too soft!

For the filling, you can choose to use a grill, barbeque or frying pan. Grill the eggplant, peppers, broccoli, sweet potato and sundried tomato in a small amount of vegetable oil until they look golden brown.

Toast waffles until slightly crispy, then cut in half. Spread mustard and chipotle mayo on the insides of both waffle halves, then add tomatoes, peppers, eggplant, sweet potato, broccoli and avocado. For extra crisp-ness, put the panini in a sandwich press for a few minutes or under the broiler on medium heat.