Put down everything and pick up your forks because you’re not going to want to miss out on this one.

I made two versions of this dish: one with soba noodles and one with flat rice noodles. For whatever reason, the rice noodles clumped together and remained hardened in certain spots even though they were well cooked everywhere else, so I preferred the soba version. The rice noodles still managed to be salvaged enough for a bowl though (as you’ll see in the photos).

One of the reasons I love this dish so much is because it’s customizable in every way. Want ramen noodles instead? Do it. Don’t like the flavours in the dressing? Whip up one of your own. Pile on whichever toppings you like, create your own, and ditch the ones you’re not too big on.

I know cold noodles may not sound like the most appetizing thing in the world at first. But once you toss on the rice vinegar dressing (don’t be shy with it) and pile it up with toppings, you’ll be a believer.

I adapted this recipe from Emily Han’s version on The Kitchn. She gives great recommendations for toppings (veg and non-veg) and the recipe turned out so well.

Cook noodles of choice according to package. Drain, and submerge in a bowl of ice water until thoroughly chilled. Drain again and set aside.

Whisk together eggs, salt and sugar. Heat a non-stick or cast iron pan and add a small amount of oil so that the surface is just covered. Add in just enough egg to cover the pan—you want it to be as thin as possible. Cook on each side for roughly 10-15 seconds, then transfer to a plate and repeat until all the egg is gone. Depending on the size of your pan, you will get 2-4 sheets. Once all your egg it cooked, cut the sheets into thin strips and set aside.

Whisk everything together is a small bowl and set aside.

Divide the noodles between two large bowls. Arrange eggs and all other toppings, and garnish with sesame seeds and bok choy leaves. Just before eating, liberally drizzle with dressing and toss. 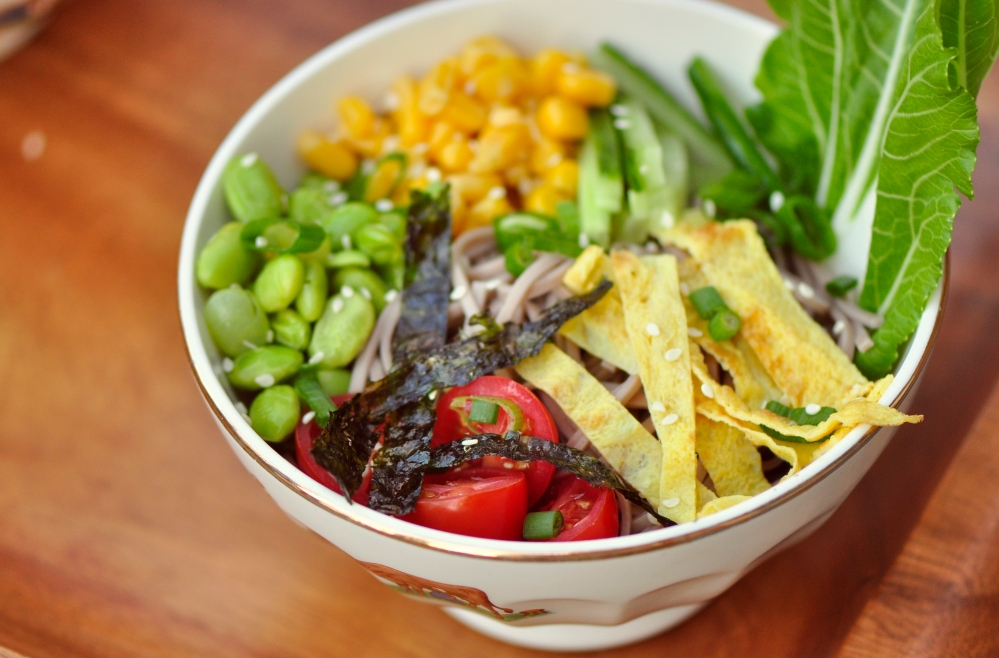