These aren’t your traditional huevos rancheros—you need to be anticipating a different flavour when you eat this. Fresh radish, coriander, a softer tortilla…it all adds up to a filling, colourful and healthy breakfast.

This is a great breakfast to make on weekends because it takes a bit of time but it’s totally worth it. I had ordered huevos rancheros a couple of months back at this great vegetarian diner in Toronto called Sadie’s Diner and it inspired me to try something out at home. I haven’t mastered it (since this is my first try) but it was a good first attempt.

It depends on the day, but sometimes I find runny egg a little gross. Soggy food becomes really quickly unappealing to me, so I have an alternative for those of you that are the same way. I would use a small corn tortilla and try it until it’s crunchy, OR I would hard boil the egg and turn this into a wrap. The second option is less of a huevos rancheros idea but it would still taste really good!

In a small skillet, heat oil over medium high heat. Add salsa, corn, tomatoes, mushroom, onion and spinach. Once vegetables begin to soften add cumin, black pepper and salt. Cook for another 2-3 minutes, stirring once or twice. Remove the mixture from heat.

In a small bowl, mash together the avocado, lemon juice and coriander.

Heat a lightly greased pan and cook egg until the whites are cooked all the way through and there is still some runny yolk in the centre. In the meantime, heat the tortilla on a skillet until lightly browned and crispy.

To assemble, put the tortilla flat on a large plate. Layer the vegetable mix and avocado-lemon mix, then carefully place the cooked egg on top. Crack a small amount of black pepper overtop of the huevos rancheros and sprinkle some shredded parmesan. Distribute the radish slices evenly and serve immediately. 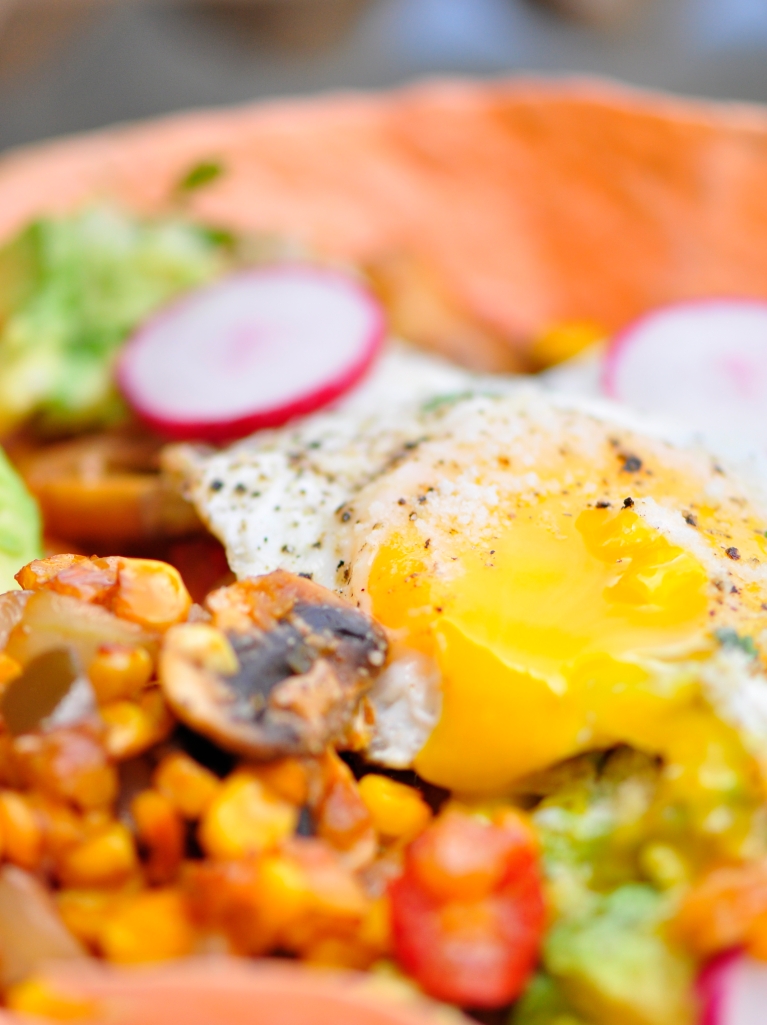 Leave a Reply to Jo from yummyvege Cancel reply