I’ve been wanting to make dumplings for a long time now and finally got around to it. Needless to say, this is going to become a regular basis meal.

I followed the recipe from The Kitchn pretty closely, would love to try it the same way with different fillings! As she says in the post, these dumplings are “freezer friendly” so you can make them ahead for whenever you’re serving them, or if you just want a quick snack.

The dipping sauce is also perfect because it’s a little bit spicy, salty and has that unbeatable rice wine vinegar flavour when serving it with shiitake, tofu and ginger.

If you can’t find napa cabbage at any of your local grocery stores, it can be substituted by savoy cabbage. From what I’ve read, savoy does take a little longer to cook and has a stronger flavour. Just a warning in case you’re looking to switch out the napa: make sure you pay attention to cooking times and altering flavours throughout the variations of cabbage.

Sidenote: These can be made vegan by removing the egg from the filling mixture—no substitute needed. The egg is mostly just for helping keep the filling together when you’re placing them in the wrappers.

Once cool enough to handle, squeeze as much liquid from the mushroom/cabbage mixture as possible. Combine the squeezed mixture into the tofu bowl; toss together until all the ingredients have evenly mixed.

Set a bowl of water on your work surface. Lay out several wrappers at a time on a dry surface, and cover the rest with a damp, clean dish towel to keep the other wrappers from drying out (this is important). Take a small amount of the filling for each wrapper, place it in the centre, then trace around the edges of the wrapper with water. Fold the wrapper over so that it creates a semi-circle shape, then pinch to seal. Place dumplings on a non-stick surface such as parchment paper. Repeat until all of the filling is used up, then either cook immediately or freeze for future use. 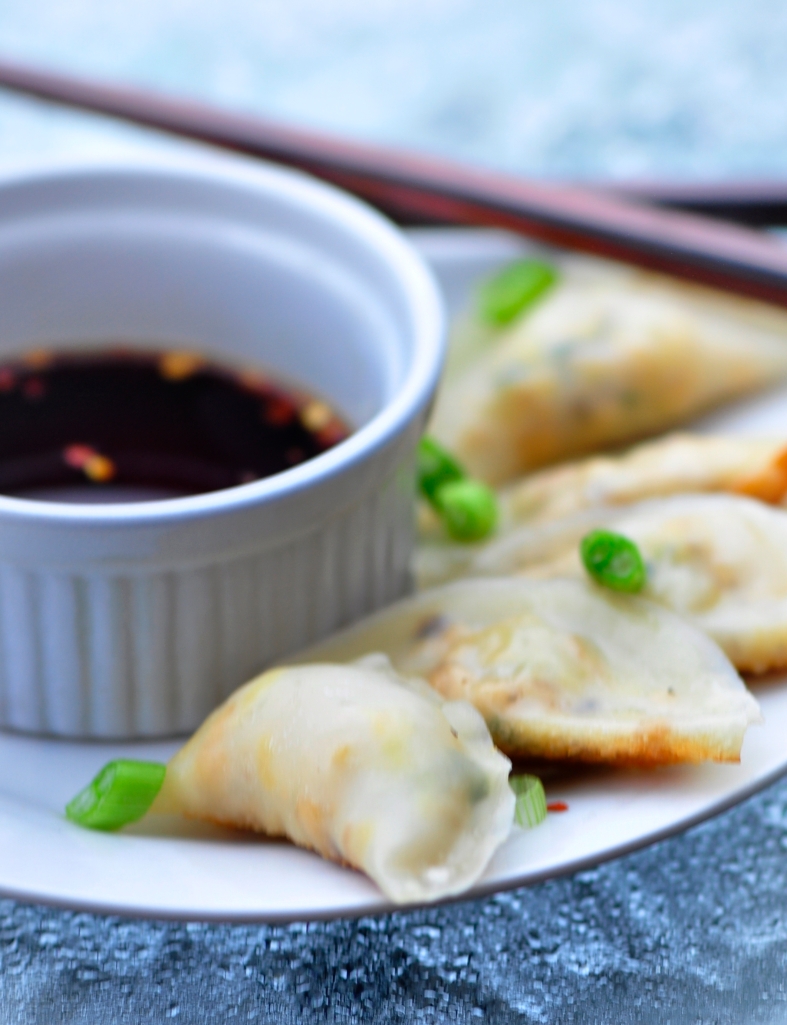 If cooking right away: Heat a small amount of oil on a frying pan (keep the lid close by) and place as many dumplings on the pan that will fit at once without touching. Cook for 1-2 minutes until lightly golden on the bottom, pour 3 tbsp. of water into the pan then quickly cover it with the lid. Turn heat down low and allow to steam for 5-6 minutes until the water has been absorbed and wrappers become transparent. Serve hot with dipping sauce.

If freezing for later use: Place the baking sheets with potstickers in the freezer, uncovered, for roughly 20-30 minutes until frozen. Transfer them to a freezer resistant container and keep frozen for up to 3 months. When cooking them, cook from frozen on a lightly greased pan for 1-2 minutes, then add in 3 tbsp. of water, cover the pan with a lid, and steam for 7-8 minutes until transparent and softened.