Seitan has always kind of been this mystical creature of vegetarian cooking for me. I hear about it, I read about it, but I never see it anywhere. This recipe is my pick from the submissions I recieved thanks to Alex from In Vegetables We Trust, andthe result was the best stew I have ever tasted.

I have to admit, I was a little hesitant to use seitan. I googled photos of it that were not appetizing, and then I wasn’t sure how to pronounce it so I essentially kept saying “satan” to supermarket workers. Apparently it’s ‘say-tahn’…regardless, it was a bit hectic. But once I bought it and cooked it, I was really pleased. It’s always nice to find meat supplements other than tofu if you want a bit of variation.

This was also my first time cooking with ale. I always hear about beer-battered fried foods or “beer can chicken”, but I haven’t seen a whole lot of vegetarian ale foods. This stew was a food experiment on so many levels. But the result was a flavourful and protein-packed stew that I’ll be taking for lunch, so I’m happy!

Sidenote: If you’re having a hard time finding seitan, I can only suggest to check in health food stores and Asian supermarkets. You can always supplement it with something else, but I can’t promise the same results. I got this one at a regular grocery store but it will depend on where you live. There are also a few different kinds; this one is chicken-flavoured but it’s not too strong. 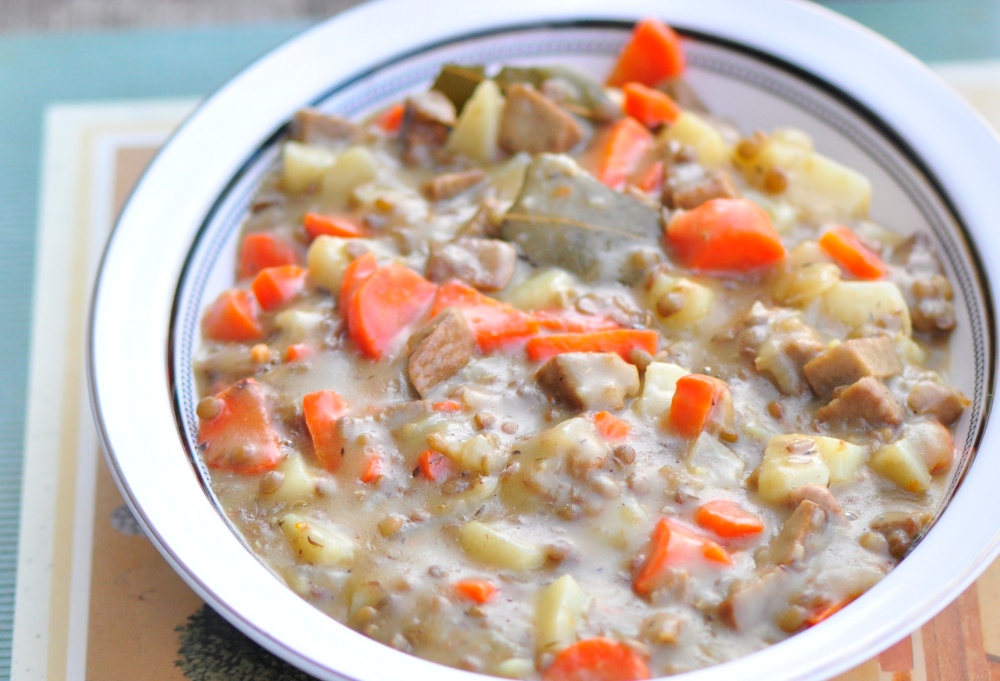 Heat oil in a large saucepan. Very roughly chop seitan pieces, reserving the liquid from the can, add them to the pan and cook until lightly browned. Remove seitan from saucepana and set aside. In the same pan, heat more oil if necessary and add onion, potato and carrot. Saute vegetables for roughly 5 minutes until lightly browned and softened. Add flour while stirring until mixture thickens.

Add in ale, liquid from the seitan can, stock, lentils, thyme, bay leaves, salt and pepper. Bring mixture to a boil, then turn down to a simmer for roughly 5-10 minutes until potatoes and carrots are tender. Add the cooked seitan to the mix, serve hot and enjoy!